Football’s always been home at LHFC

A home on the pitch

In 2012 LHFC player Becca Mushrow represented England at the Homeless World cup in Mexico. The following year she travelled to Poland and had progressed from player to assistant coach for the women’s team. Next stop was Amsterdam in 2015 where she was general manager. As a result, football changed her life. She had a sense of belonging, of community, of having a home on the pitch. Becca finally has her life back on track she is still coaching and travelling the world with the Homeless World Cup.

Club Vice Chairman James Buckley was living in a hostel in Crewe when he first became an England player. He was fortunate to be selected to play in the 2011 Homeless World Cup in Paris. Shortly after returning from Paris he moved to Liverpool. James thinks his move to Liverpool is one of the best things that ever happened to him. The club were able to support him through his FA level 1 and level 2 coaching badges and in 2012 he also travelled to Mexico, his role was as the Men’s assistant coach. Today James is in the final few months of his apprenticeship at Jaguar Land rover and life is good. Watch the catch up with James and John Bishop .

Good luck from LHFC where home is the goal

Everyone at LHFC wishes Gareth Southgate and the England team all the very best of luck for Wednesday’s semi-final match. Of course the excitement is building in the office. Consequently, if I had a penny for every time one of us has burst into song “football’s coming home, it’s coming…..” the cost of a flight to Russia on Wednesday would be within my grasp. However, I am heading down to the Pier Head wearing my new t-shirt to  join the masses cheering on the lads. 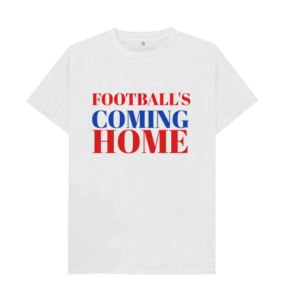 toptops is an ethical company whose products are made from organic cotton. All goods are printed in the UK in a renewable energy powered factory. The company owner Ste Cross has kindly designed some LHFC merchandise. Great news for us as 20% of all sales are being donated to the club. Take a look and get behind England and LHFC with a new Football’s Coming Home t-shirt. Your purchase could help change a life.

Finally our CEO had a call from Sian Downes, of Street Soccer Scotland,  she said that despite all the banter and rivalry most people over the border are rooting for England. The whole nation is gripped with World Cup Fever and we are all behind them.

COME ON ENGLAND BRING IT HOME!