There are many differing definitions of homelessness depending on which Government department is commenting, but for this report, the definition includes people that are sleeping rough or using emergency accommodation such as homeless shelters and direct access hostels.

Five Times as many Male Deaths as Female

The estimated number of deaths of homeless men in 2017 was 503, or 84% of the total, compared with 94 women. Over half of the people who lost their lives were down to three main factors, accidents (including drug poisoning) accounted for 40%, suicides accounted for 13% and diseases of the liver accounted for 9%. See the chart below for the full breakdown.

There was a substantial increase over time in drug poisoning deaths of homeless people, from 125 (26% of the total) in 2013 to 190 (32% of the total) in 2017. Deaths from alcohol-specific causes also increased, while deaths due to suicide fell slightly over the five-year period.

London and the North West had by far the largest numbers of deaths of homeless people in 2017 out of the English regions, with 136 and 119 estimated deaths respectively. London had more than one-fifth (23%) of the estimated total number of homeless deaths in England and Wales. In contrast, Wales had fewer deaths than any of the regions of England. 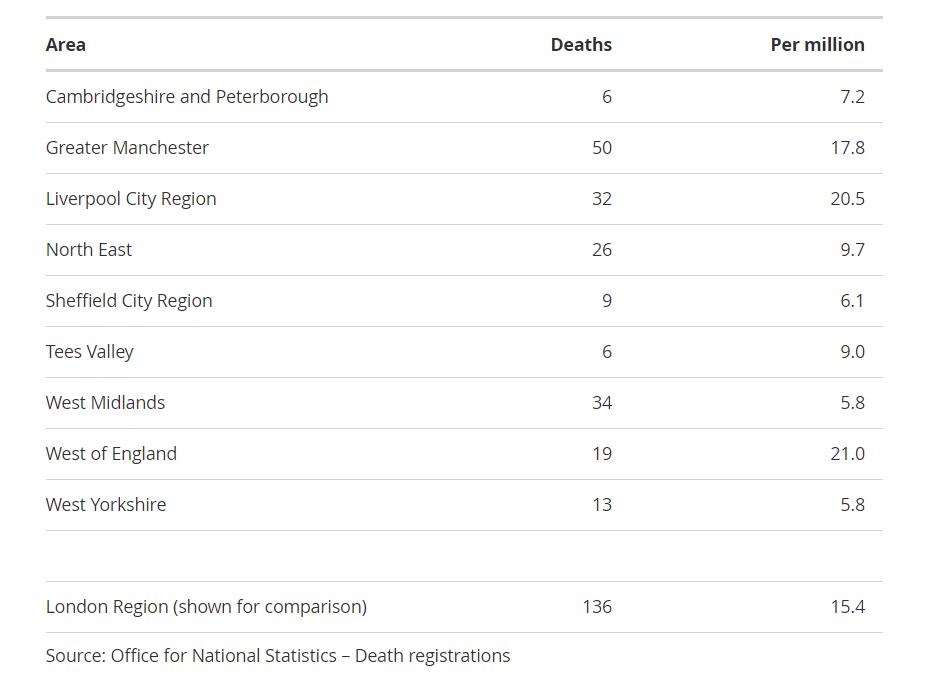 One of my first thoughts is, why is this the first report ever carried out by the Government into the number of homeless deaths? Now that we have this report, what can be done, as deaths have gone up year on year for at least the last 5 years? Also, why does our area, the North West Region, have more deaths than anywhere else (excluding London).

I think that now the question has been opened up, we need to campaign for a standardised classification of homelessness, to allow statistics and reports to be carried out and not hidden behind.

We know that this a complex issue, but it is an issue which everyone should get behind because in 2018 in the UK, these deaths should not be happening, and they certainly shouldn’t be on the rise, year on year. The reason how we know that this is happening is that we work on the coal face, dealing with the mental traumas, family disputes, loss of employment, relationship breakdowns, drug abuse, the list goes on which is why a blanket solution won’t work. We need a willingness on the governments part, the health professionals, the homeless organisations, in fact, all stakeholders to sit down and find a solution to this issue.

Until this happens we will carry on with our #morethanjustfootball ethos and engage with our members through sport.

If you are affected by homelessness in Liverpool, the city council provides an option for everyone. Labre House is a night hub open from 8pm to 8am, 365 days of the year and provides a safe and warm environment for the city’s rough sleepers. If you would normally be sleeping rough for the night, just turn up at the shelter on Camden Street, and their staff and volunteers will help you. Any rough sleeper will get help and won’t turn anyone away – not even your dog. Whatever your circumstances, there’s always room inside.

If you see rough sleepers on the street in Liverpool, tell them about Labre House and the services it provides and get in touch with them on 0300 123 2041. Outreach support workers will do the rest.