Yesterday more than eighty women gathered at the Power League, Liverpool, to compete in the Women Against Domestic Abuse #WADA18 tournament and what a day it turned to be. The annual tournament is organised by LHFC with support from Liverpool County FA and offers the opportunity to local women’s support agencies and organisations to come together and have fun, meet new friends and to raise awareness of the issues surrounding domestic abuse. To Kick off the day Councillor Anne O’Byrne our long-standing supporter gave a motivational speech and released  two purple balloons, in honour and memory of the two lives lost each week through domestic abuse.

“Today is about women supporting women. Its about raising awareness of Domestice abuse . Its about being there for our sisters.” Anne O’Byrne

The #WADA18 tournament caters for all levels of fitness and ability and as such is played over two divisions. All the women involved had a fantastic day and Alder Athletic Ladies FC were more than delighted to claim their first trophy as Higher division winners. While the Sovini Group were worthy winners of the Novice division. 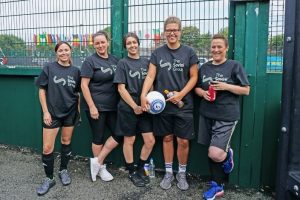 LHFC entered a team into both divisions and they did themselves, their coach and everyone at the club proud. Anna Farrell of the FA commented on how well the girls did and how much they had progressed. Also and just as importantly, their Coach Jess was suitably impressed and will be aiming for improved results in the Futsal league.

Shelly Falangie (Miss Tesco, Park Road) and her colleague Pam Lewis kept the women refreshed with their supply of fresh fruit and cold drinks. As usual the Back Kitchen was on site and both Gary and Olivia provided a service with a smile, serving hot food and drinks for lunch.

Our partners from local support agencies were in attendance and advisors were on hand to offer support and advice on issues surrounding domestic abuse. Follow the links below if you need help or require further information:

Feedback about the day was very positive with lots of praise and comments on social media after the event.

A Brilliant day at the Power League Liverpool with @LivHomelessFC @RotundaLtd @worstkeptsecret @sovinigroup and many more supporting the Women Against Domestic Abuse match day! #WADA18 pic.twitter.com/rkZnY8TyUs

Well done to everyone involved in making the day a success. A huge congratulations to all the teams and their continued support and enthusiasm is much appreciated. The next tournament is planned for October (details to be finalised) and it is hoped even more teams can gather for another fun filled day.

Finally, thanks to our team of volunteers, YOU ARE PRICELESS!