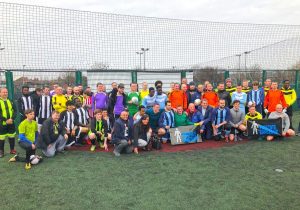 How I have missed match days, well they are back and what a great start we had for match day 1. It was a nice pleasant day the sun was out. There was over 100 players who turned out in there new kits to play some football, have fun, eat and meet new people. There are some new teams this season which means new faces. This is always a joy for me because that means more people doing something which will improve their health and well-being also shed some positivity in their life giving them the motivation to fight life’s challenges.

Our first theme for this month was Prostrate Cancer. We had Jamie Carragher say a few words and opened this seasons league. Also we had Ann O’Byrne who is a great supporter of what we do at LHFC as well as Metro Mayor Steve Rotheram. Several other councillors  attended for the first time and were very impressed. 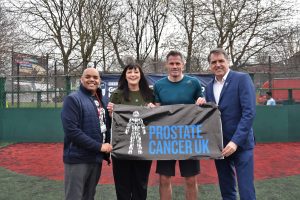 Our wonderful NHS attended giving advice and support on various health issues. Smoke free Liverpool were  giving advice on how to quit smoking.  Please look out for them at our next match day, go and have a chat they won’t bite I promise.  Finally, our volunteers who are always fantastic,  were there on the front line helping and supporting anybody and everybody. That’s the great thing here at LHFC, if you don’t know already you wouldn’t be able to pick out who was who, like who is the B___ (sorry for the blanks we are not allowed to use the B word)  WE ARE ONE. I would like to say a big thank you to all that turned out.

This season we thought we would change it up a bit by having match day 1 as a seeding tournament. We pooled the teams into 3 groups of 4, who then played each other.  From the days results each team will be seeded and grouped with other teams who are of a similar standard.  Each group will then play for the right to call themselves champions and challenge for the group cup.

For me personally everyone is a champion, turning up and getting out there in the fresh air, is what makes the day for me. Seeing everyone having a good time enjoying the day. The beautiful game of football is great to watch before, during and after, the passion from the players is heart-warming to see. I enjoy walking round having a good jangle finding out what people have been up to.

Next month is approaching fast, our theme will be SHOW RACISM THE RED CARD. We look forward to seeing you all there